The Elora Mill has been the jewel of Wellington County for over 175 years. Once a thriving hub of commerce and industry; today a charming centre for community and social gatherings. The mill was built to harness nature; today nature embraces the building.

During the 1800’s, throughout Canada’s settlement, mills played a pivotal role in the country’s landscape, both socially and economically.

Built of solid limestone foundations and located alongside major waterways, mills represent a connection to Canada’s industrial past. As a hub for socializing and trading, they became the cornerstone of a thriving community.

From 1851-1859, J.M. Fraser commissioned labourers from Scotland to hand build the Elora Mill. In 1859, the first of two devastating fires destroyed the mill and it subsequently changed hands to Ross & Company, where it was rebuilt and the site extended to become a gristmill, sawmill, wool factory and shops.

In 1944, the Elora Mill was sold to N.R. Drimmie & Sons, who operated it as Drimmie Mill, where grain was sold and the granary used for grain storage. By this point, Elora had become the centre of the farming community where local farmers would frequent to trade grains and buy seed for their livestock.

The Elora Mill opened as an inn for the first time in 1975, under the ownership of Andrew Panchuk and David Silverman. After changing ownership several times, the Elora Mill site was left in a state of extensive deterioration. It was then, in 2010, that Aaron Ciancone – Owner and President of Pearle Hospitality – rescued the property from bankruptcy.

After six years of intensive modern-day planning and design, the Elora Mill began its next transformation. Building upon its century-and-a-half-old foundation and stone walls, applying original craftsmanship and raw materials, and in collaboration with Lori Morris Design and the incredible architects at Hicks Design Studio the Elora Mill Hotel & Spa opened on July 6th, 2018, giving new life to this iconic building once again.

Nature never hurries. Atom by atom, little by little she achieves her work. 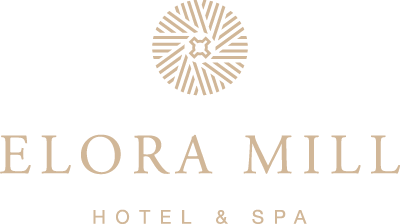